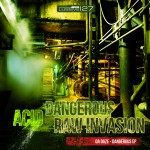 Mihail Gorjunov, also known as Da Daze, started producing Electronic Dance Music in 2008. He comes from a small town in Estonia, called Kallaste. Mihail’s goal is to be one of the first Hardstyle artists from Estonia, to make name in Europe. In the autumn of 2012 he proudly has his first release on Lussive Music. “Da Daze – From The Past” and “Da Daze – Going Crazy” are just the beginning of what is to come. Mihail: “The hardstyle sound has it all for me. Melodies, which make it a pleasure to listen to. Hard kicks, which provide a massive sound that makes you rock on the dancefloor.” The “Da Daze” sound can be best described as hard & extremely energetic with mechanical sound elements.
Mihail shows that it doesn’t matter what country you are from to write music. The key to working with music is inspiration, taste and skill. His tracks “Desire“, “Raw Invasion” and “Lay Me Down” received a lot of support from the raw hardstyle scene.

Book Da Daze for your event:

You can book Da Daze through Lussive Music Bookings