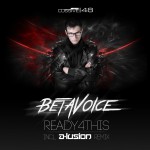 Alex Skurtul, residing in St. Petersburg Russia, is showing the world that hardstyle is universal and is growing stronger day by day. He is proudly signed by Lussive Music, which makes him one of the first successful hardstyle producers from Russia. Alex started producing in 2008 and got hooked to the hardstyle sound after experimenting with House and Trance. In 2011 he had his first release as “Alex Sance” and now he will spread his wings by launching his new project “Betavoice” at Lussive Music. Betavoice will bring you energetic rhythms, uplifting melodies and strong beats. With his first digital release on Lussive Music, Betavoice was going “Out of Range”, to “See You” and ignite your “Audio Spark”.
In 2013 he released tracks like “Replace The Sun“, “Nothing At All” and “I’m Gonna“, which made his name bigger and got him featured on many podcasts and compilation CDs.

Book Betavoice for your event: